Preface: I am planning on starting a series for young trainees of all kinds, including physicians, nurses, physician assistants, nurse practitioners, Emergency Medical Technicians, patient care technicians, and Paramedics. The purpose of this series is to share what I have learned along my journey so far, and what I continue to learn for the rest of my career in Medicine and Emergency Medicine. Please be patient with me as I work out the formatting, organization, and schedule for these posts. I felt this was an important topic and decided to start with a post addressing mental health among trainees, and those who deliver medical care. This is the start of my blog post contributions to #TipsForNewDocs. I welcome any and all comments, feedback, and hope that you may be inspired to share your experiences and join in allowing the medical community to feel empowered to share and process their experiences and emotions.

Note: Please be aware that the contents of this blog post contain descriptions of patients and their health conditions which may be graphic or upsetting to certain readers. In order to protect patient privacy I have kept things as general as possible, changed some of the situations around to protect those involved, and I hope you all understand the purpose for this post and do not dwell on the specifics. The specific patient situations are simply what I have observed, but all in health care will have their own stories. 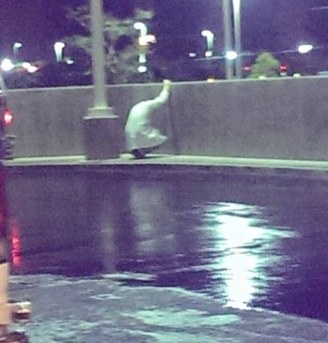 Many of you will recognize the photo above. It went viral last year after it was posted on social media by a friend of the physician posted in the photo, by permission. For those of you who are unfamiliar with the photograph and the story behind it, I encourage you to review this post which synthesizes the events that transpired and the background of this quite well.

This photo, and the story behind it, resonated with me so much when I learned about it. All my life, I had been known by family and friends to be emotional and attached to those around me. I knew going into medicine what was in store for me. That being said, it hasn’t and doesn’t make it any easier for me to deal with bearing witness to the suffering and loss that I do on a daily basis in my line of work.

I wanted to share some personal patient encounters that troubled me and caused me grief and emotional suffering afterward, because I think it is important we allow physicians, nurses, physician assistants, nurse practitioners, patient care technicians, and all those who participate in patient care, to experience, process, and truly be open about how they feel.

The first time I really cried after starting medical school was when I was a fourth year medical student. During one of my away rotations in an Emergency Department, I helped in the care of a police officer who was shot in the line of duty. I had assisted with and observed innumerable trauma resuscitations by this stage of my training, so the actual events transpiring in front of me were not unfamiliar to me. However, what was different about this situation, the first time I was directly involved in caring for an officer who was injured, was the sheer emotion of the situation. The officer’s colleagues flooded the Emergency Department. There was a complete different tone of urgency among the supervising attending physicians and trauma surgeons. I could see in the eyes of the nurses, technicians, physicians, and officers around me, that this was hurting them. The pain and suffering the policeman was enduring, the treatment that he was receiving, it was causing a tidal wave of many emotions throughout the facility.

There must have been 15 police cruisers that showed up outside of the department within moments of the officer’s arrival. Several of his lawmen had brought him to the department in their cruiser, since there was concern that by the time an ambulance arrived, the officer would be too sick to save. This was one of the first times I learned that in some situations police officers, because of the environment they served in, had to transport patients with trauma to Emergency Departments in their own cruisers. Not many people know this about police officers, and with the recent negative publicity that surrounds law enforcement all over America, I wish it to be known that police officers do so much that the news media never shares. They are, in many ways, endangering themselves day in and day out, for the general benefit of the citizens they serve. Bad apples always exist, and create negative publicity, but please do not forget what the men and women of America’s law enforcement agencies signed up to do for us – protect us.

The officer was rushed to the operating room, and there was silence in the Emergency Department. For anyone who has ever worked or been in any ED for any period of time, even as brief as 30 seconds, there is never silence. If an ED is quiet, you should worry. It took a good 30 minutes for the entire department to shake the effects of the trauma resuscitation. Staff, patients, officers who lingered behind for a time, appeared dazed. You could see some were emotional, but most looked stoic.

I went about the rest of my shift as usual and went home. It wasn’t until several days later that I realized how much this had affected me. I was watching The Wire with my wife (SPOILER ALERT) and watched an episode in which an officer was shot. In the make believe show, the officer was transported to Shock Trauma for resuscitation. I immediately and suddenly burst into some of the most awful crying I have ever done in my life. It rivaled how much I cried when I was kneeling besides my dying grandfather at home, who was on home hospice for his bad lung cancer, and whose hand I held as the last glimmers of life left his eyes. As I write this, I am fighting back the desire to again cry, because I happen to be writing this in a public space.

My wife held me close, and comforted me. She was patient, she did not judge, and she was everything I love her for. She waited for me to speak first, and then proceeded to very calmly and compassionately try and find out what was wrong. I explained to her, not mentioning specifics, what I had observed in the Emergency Department with the police officer. She immediately understood without much explanation why the events that transpired in The Wire affected me so much. I continued to cry and bawl my eyes out, until finally I regained my composure. I felt a lot better having shared my emotion with my wife, and for allowing myself to feel the raw emotion I was dealing with. This was an important moment for me because I realized that this needed to happen for me.